Sea-Level Rise may save our wetlands yet...

Over the past century, sea level has risen nearly eight inches along the California coast, and general circulation model scenarios suggest very substantial increases in sea level as a significant impact of climate change over the coming century. This study includes a detailed analysis of the current population, infrastructure, and property at risk from projected sea‐level rise if no actions are taken to protect the coast, and the cost of building structural measures to reduce that risk. We find the following:

• Under medium to medium‐high greenhouse‐gas emissions scenarios, mean sea level along the California coast is projected to rise from 1.0 to 1.4 meters (m) by the year 2100. A series of maps for the entire coast of California demonstrating the extent of the areas at risk are posted at http://pacinst.org/reports/sea_level_rise

• A 1.4 meter sea‐level rise will put 480,000 people at risk of a 100‐year flood event, given today’s population. Populations in San Mateo and Orange Counties are especially vulnerable. In each, an estimated 110,000 people are at risk. Large numbers of residents (66,000) in Alameda County are also at risk.


To read the report: 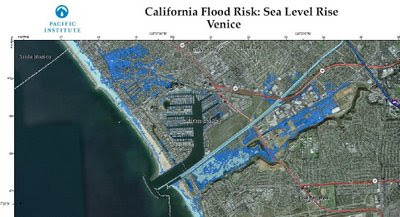 Ice sheet melting has since accelerated. Dan Cayan, a researcher at the Scripps Institution of Oceanography and a lead scientist on the state's action plan, said the 55-inch estimate in the report is "probably conservative. . . . As temperature climbs, melting is going to proceed at a greater pace. It is not necessarily going to proceed linearly, in the same proportion as it did in the past, because melting begets more melting."
Posted by Rex Frankel at 11:13 AM