------
State Unveils Restoration Plan for Ballona Wetlands to Extreme Alarm of the Folks Who Fought For Years to Save It;

And here's the contradiction: While we are told there isn't money to buy the remaining open spaces next to the wetlands that are threatened by developers, there is over $200 million to pay for bulldozing the wetlands?

Restoration By Bulldozer Is Not The Way to Go...

We have been informed by the State officials in charge of the restoration planning for the Ballona Wetlands that they favor the most habitat-altering proposals of the 5 that were unveiled in September. Alternative 5 is the plan which proposes dredging out over 90% of the 600 acre wetland/wildflower property, and it would replace what is there now almost entirely with an arm of the ocean. Gone would be the hiking trails, the little league fields, and almost all of the uplands that are now covered with sage brush and trees and the freshwater habitats.

I have posted some of the State's maps. Look at the map legend for the phrase "new habitat to be created" compared to the areas labeled "existing habitat to remain"; this shows how much of the land is to be dredged/bulldozed under each proposal.

The director of the Santa Monica Bay Restoration Commission, Dr. Shelley Luce, informed me last week (Nov. 6th) that the EIR for the restoration will only consider Alternatives 4 and 5 and doing nothing at all. That ignores the more reasonable proposals that restored some of the wetlands while preserving existing trails and upland habitat.

To view the 5 alternatives, here is a link to the State's website: 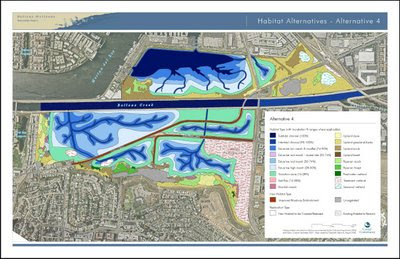 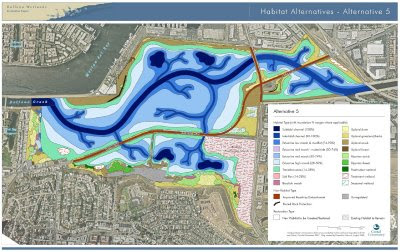 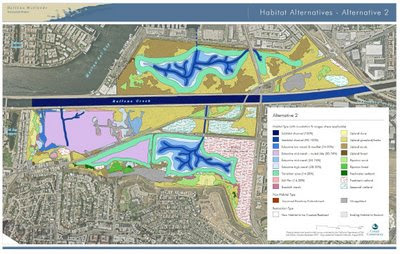 HERE IS A TABLE OF THE COST ESTIMATES OF ALL 5 ALTERNATIVES: 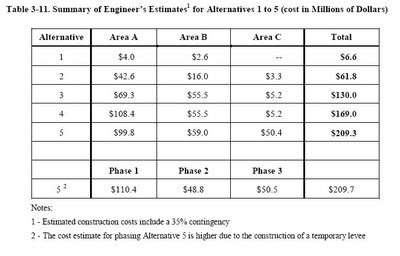 Here is our opinion of the Plan that was endorsed by the Restoration project's Science Advisory Committee:

Alternative 5 is an outlandish, over-reaching solution without a problem. There is very little that needs fixing at the Ballona Wetlands. We spent 20 years fighting to keep this land from being bulldozed and turned into condos and a yacht harbor. Now the State wants to bulldoze it and wipe out two of the three natural habitats at Ballona to turn it into an inland sea. The community loves Ballona because it is a remnant of the three habitats that were once common in Los Angeles: salt marsh, freshwater creeks and grass and wildflower-covered uplands ringed by hiking trails. All of these natural habitats are nearly extinct in L.A.

To massively bulldoze and dredge out 90% of this fragile nature preserve to create an almost exclusively saltwater-world-like amusement park ignores the needs of the community that has grown up around Ballona walking the trails and smelling the wildflowers. While it is essential to bring water back into the wetlands, it should not be done at the expense of our walking paths and the uplands which are the nesting areas for so many of the wetland wildlife. What might be a good plan for fish is bad for birds and lizards and butterflies. Alternative 5 is not a balanced plan but one that satisfies a very narrow interest. To preserve biological diversity and the remains of nature in L.A., we support a balanced habitat plan like in Alternatives 1 and 2.

Here is an account of the Science Advisory Panel meeting by Marcia Hanscom, who directs the Ballona Institute (NOTE: I have posted Hanscom's email so our readers can hear the variety of views on this issue. While I agree that the proposal circulated by the State planning team goes too far, I can not vouch for the accuracy nor necesarily agree with how Hanscom characterizes the events of this meeting since I was not there. I have heard from some that disagree with her account of the meeting. I have asked the State and Agency officials mentioned in her message to respond, and if they do, I will post them.):

9/20/2008
Well, after the *majority* of the public (even Friends of Ballona Wetlands/Playa Vista attorneys - they are worried the birds at the freshwater marsh may not have enough upland habitat surrounding the area!) expressed grave dis-like for alternative #5, and expressed concern for the land to be PRESERVED and the wildlife RESPECTED at this Working Group meeting....The only ones who expressed strong support for this radical vision of #5 were Mark Abramson, formerly of Heal the Bay (who helped pick the Science Advisory Committee, which is mostly made up of former Rich Ambrose students - Ambrose being the one who has little clue about land and wetlands ecological processes, only marine ecology, which he focuses on without knowing the rest) and Isabelle Duvivier, who is on the payroll of the State Coastal Conservancy, so, of course, she supports what they are pushing.

The next day, after a 6-7 hour meeting of the "Science Advisory Committee" - which has long been stacked with those who John Hodder has described to well below (pro-engineering and ignorant of ecology) - voted unanimously to support Alternative #5. Sean Bergquist immediately turned to National Marine Fisheries Service rep, Bryant Chesney, with a "high 5" and a big smile for getting what they wanted, which is an extension of the Bay inland, instead of a respect of the wetlands ECOSYSTEM.There were a couple of good scientists who asked strong and valid questions, but they were pooh-poohed with non-answers by Rich Ambrose, Shelley Luce, Mary Small and Sean Bergquist, the leaders in what they are calling a "planning process." Even Michael Josselyn, who long worked for the Friends of Ballona Wetlands, said he could not support this plan without a lot of "caveats." In the end, he, Camm Swift and Wayne Ferren, while expressing grave concerns, agreed to go along, so they could stay involved with the process - which is clearly being taken over now by the Army Corps of Engineers.Bottom line? What is being touted as a more NATURAL, sinuous stream restoration, will be nothing of the kind. They will need to build curving levee WALLS around edges of their curvy, unnaturally-formed (but mimicking nature) tidal channels, and nearly all of the upland areas will be wiped out. At the end, there was a BIT of a concession made and it was said that MAYBE Area C will be "restored" to grasslands. It will still be good-bye to the Great Blue Heron as a nesting species at Ballona, good-bye to the White-tailed Kite and Northern Harrier, good-bye to California King Snake, California Ground Squirrel, Horned Lizard, and possibly even the endangered Belding's Savannah Sparrow - as the channel where they currently nest will also be dug up and re-made in the likeness of whatever these people think is best. Best for what? Seemingly it is water quality driving this project, even though we all voted and AGREED that Water Quality was NOT the consideration we wanted guiding this process, but rather ecological processes.When Rich Ambrose was asked by scientist Ken Schwartz - what will the impacts of these plans be on various species - Ambrose said "well, we don't have enough information on this. I've asked a student I have working on a list of species at Ballona, but it would just be he and I guessing" This is pathetic, both as an answer and as a huge mis- calculation and non-understanding of what is at stake here - and from the co-chair of this "Science Advisory Committee."

Roy, Edith Read, a woman from Heal the Bay, Kelly Rose (from Friends) and I were the only public members who attended this day-long SAC meeting. Sack the SAC! may be our rallying cry. The public was not allowed to talk until the very end of the meeting, well after the vote was taken. We had asked the night before to be able to speak BEFORE the vote, but we were denied by Mary Small, who is running this show for the State Coastal Conservancy.

If any of this disturbs you, I hope you will write to your Assemblymember, your State Senator, the LA City Councilmember for this area (Bill Rosendahl) and our LA Mayor, who helped buy this land to begin with. They would all be very disturbed to learn these things. And, send a copy to us, if you would.

Posted by Rex Frankel at 4:35 PM No comments: