NOW'S THE TIME TO SAY YOU WANT BALLONA PROTECTED, NOT RIPPED OUT AND TURNED INTO SOMETHING IT NEVER WAS

RESPOND TO THE MASSIVELY DESTRUCTIVE STATE PLAN FOR BALLONA 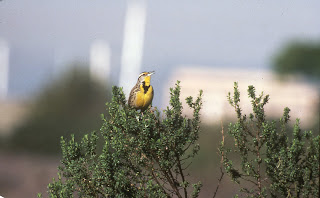 A public scoping meeting to receive input on the scope of the DEIS/EIR will be conducted on Thursday August 16, 2012, from 4:00-7:00 p.m. at the Fiji Gateway entrance to the Ballona Wetlands (13720 Fiji Way, Marina del Rey, CA 90292, across from Fisherman's Village and Los Angeles County Department of Beaches and Harbors).

ON THURSDAY, SUPPORT SAVING OUR TRAILS, KEEPING POLLUTION OUT OF THE WETLANDS, AND "RESTORING" THAT SERVES ALL THE WILDLIFE THAT IS THERE NOW!  SUPPORT BEEP'S ALTERNATIVE VISION PLAN! (see picture at bottom of this page)

--Removal of most long-used public trails


FOR FULL NOTICE AND DETAILS:

MY OPINION, (by Rex Frankel, director of the Ballona Ecosystem Education Project --BEEP):

There are miles of trails in these wetlands which the State wants to eliminate. They say the public will damage the land by walking on it, yet they want to unleash massive bulldozers which will do massively worse damage in the name of "restoration". Thus, the State has declared the entire area closed to the public. I believe this is because the state wants to keep the public from seeing what a thriving natural habitat it is, believing we then won't counter their scare stories that the place is a disaster and must all be ripped out and replaced with the bureaucracy's non-historically accurate vision.

NOT HISTORICALLY ACCURATE?
It's not a restoration because it won't be returned to what it was before man arrived here. The State plan takes it back not 200 years but 4000 years to when it was an arm of the ocean and home to only sea creatures--what scientists call a monoculture. But 4000 years ago it was clean, not filled with urban pollution. (See this video presentation by Dr. Travis Longcore of USC explaining how the history of Southern California wetlands contradicts the State's preferred vision for Ballona restoration: http://www.youtube.com/watch?v=1viLaZaVhQY)
Now, just like 200 years ago when man arrived, Ballona is a biodiverse ecosystem and has three natural habitat types: salt marsh, freshwater marsh and wildflower and sage covered uplands. Under the State plan, two of those three natural habitats and their wildlife will be mostly eliminated.  So it's not a restoration to what it was when man arrived, but a return to a date that happens to coincide with their plan to to turn it into an all polluted urban street drainage dump, while now it is protected from L.A. 's pollution by the creek levees. Yes, the levees along the creek are not natural but serve an important natural purpose, which is to keep all the urban trash and grease and dog poop from flowing from the creek into the clean wetlands. Given that L.A. is here to stay, to rip out the levees with no plan to clean up the creek first is a recipe for disaster.

Why does the State bureaucracy want to dump L.A.'s polluted urban street drainage into the Ballona Wetlands? Because they are under a court order to comply with a federal law that requires the massive L.A. urban region to stop allowing its storm drain system from funneling urban pollution to our ocean and beaches. But rather than planning and creating their long-promised upstream treatment system (see posts on this here:  http://ballona-news.blogspot.com/search/label/Restoring%20and%20Unpaving%20Local%20Open%20Spaces%20to%20Clean%20Up%20Santa%20Monica%20Bay%20Beaches
), the Ballona Wetlands, which lie between L.A. and the ocean,  have instead been chosen to be sacrificed as a massive pollution filtration system.

The State's plan is, to put it bluntly, just crazy! We need a plan that protects the three existing wildlife habitats and our trails AND allows some re-wetting of appropriate portions of the wetlands, and brings in clean water from the ocean--like it was 200 years ago. Every time we suggest this to the squadron of state bureaucrats, they say sorry, we've made up our minds. Well the public is speaking out and we want a new plan!

ON THURSDAY, SUPPORT SAVING OUR TRAILS, KEEPING POLLUTION OUT OF THE WETLANDS, AND "RESTORING" THAT SERVES ALL THE WILDLIFE THAT IS THERE NOW!


WE HAVE THREE CHOICES FOR THE BALLONA WETLANDS:

DO THE MASSIVE STATE BULLDOZING PLAN.


OR FIND SOMETHING IN BETWEEN THOSE TWO.

BELOW--BALLONA WETLANDS TODAY--ok, it's drier than it was 200 years ago due to road construction which blocked the ocean from getting to it and it has problems with trash dumping and non-native weeds. But it has huge areas of clean natural wildlife habitat that with a sensitive and non-destructive plan could be easily restored to its pre-urban L.A. glory days. 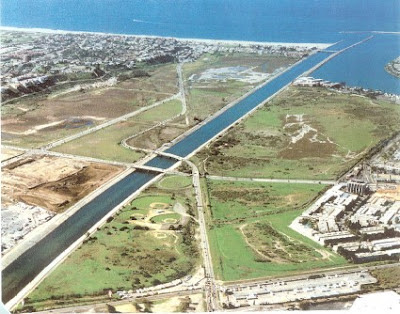 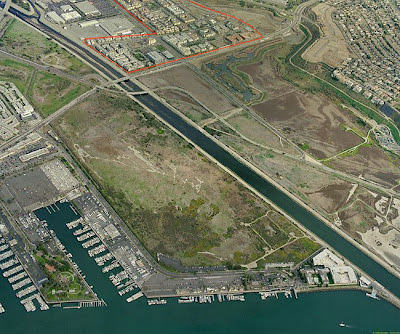 BELOW--BALLONA WETLANDS UNDER THE PREFERRED STATE PLAN
The levees that now keep trash, grease and dog doo out of the wetlands would be removed and all this will flow straight into our fragile wetlands. 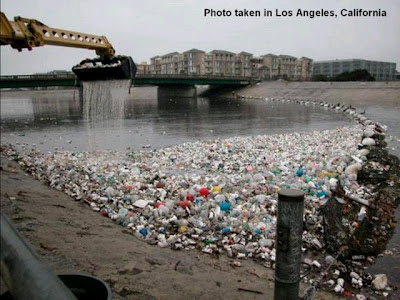 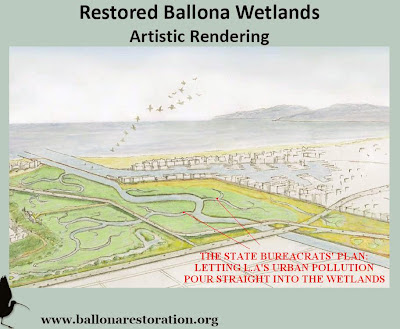 OR BELOW--A VISION WE SUPPORT THAT IS MORE HISTORICALLY ACCURATE, KEEPS POLLUTION OUT OF THE WETLANDS AND PROTECTS OUR TRAILS

A new lawsuit is filed over Playa Vista's last phase... 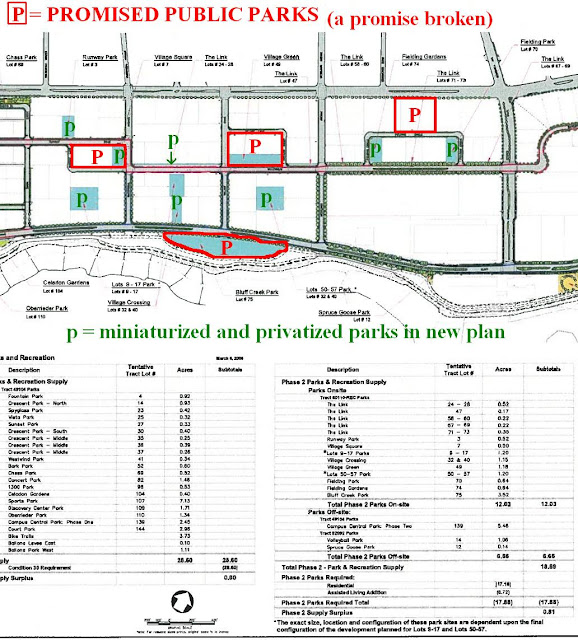 Posted by Rex Frankel at 2:37 PM No comments: 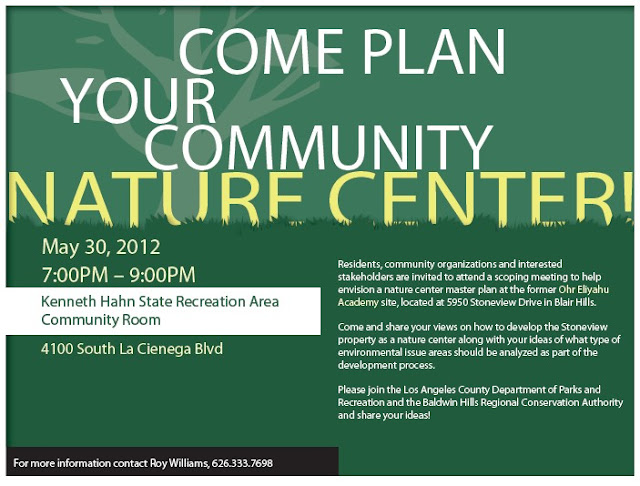 Posted by Rex Frankel at 5:27 PM No comments:

some sad news, yet we count our blessings.

4/4/2012--Dear Friends,
We are sad to report that the California Supreme Court has declined to take our case over the second and final 111 acre phase of the Playa Vista development in the Ballona wetlands area. Our case over this last phase was filed in 2004, and in 2007 we were successful in overturning the plan which totaled 2600 condos and 300,000 square feet of shopping center and offices. The state’s Appeals court called the developer’s environmental impact disclosure documents “dishonest” numerous times. This is because Playa Vista’s lawyer and these documents covered up the true nature of the project: to award a massive $300 million gift of development rights for land upon which this developer had traded away their development rights in order to build their first mega city in their Phase 1 project.

The City’s own 1993 approval documents for Phase 1 specified that one of the “benefits” to the public from approval of Phase 1 was the “elimination” of the remaining development rights on the rest of their land. Unfortunately, in the opinion of this court, our state’s environmental laws allow the developer to fix the huge errors we discovered with a little paperwork correction, and they allow the City Council to then ignore the impacts of the actual project once they are revealed.

So, Playa Vista has been awarded the rights to build on the rest of their land. BEEP has challenged their development plans since 1985 and, despite this court loss, our work has resulted in 70% of the original 1000 acre site being saved as wetlands, wildlife habitat and parks. The original car traffic totals from their project have been reduced from over 200,000 more cars a day to under 80,000. The total amount of condos has been reduced from over 13,000 to 6100.


A project that was seen as a “done deal” has been made a lot less offensive through our work and that of our partners.

Some of L.A.’s biggest developers have wracked up hundreds of millions in losses (at least $600 million) in trying to get around the community opposition. As the president of the Playa Vista company said in 2004, "Would these guys get together in a room and do it again? They would say 'No.'"

We at BEEP are proud of our work, and, yes, we would fight this battle again.

We will continue watching over the future restoration plans for the saved Ballona Wetlands preserve, by the new owners, the State of California Department of fish and game, and we urge you to visit the wetlands sometime, or attend the Wednesday evening hikes at local nature spots led by our president, Rex Frankel, which are listed here: http://lameetuphikes.blogspot.com


BEEP’s next project is posting our massive environmental research and local history library on the internet so future developers looking to wreck natural treasures in Los Angeles will see the battle they face.

Will Playa Vista's big-time investment group, made up of Morgan Stanley, Goldman Sachs and Oaktree Capital Management, finally make any money on this deal? Playa Vista President Steve Soboroff expects the return to be modest on what's estimated to be a $1.2 billion investment by the time construction wraps, probably no sooner than 2010.

"Would these guys get together in a room and do it again? They would say 'No,'" said Soboroff. "Will they get any sort of return on their money? De minimis, but that's because everything that could possibly go wrong went wrong."

Playa Vista: Wetlands Development is a Financial Quagmire... for the developer

The head of Playa Vista, Steve Soborrof says his project has lost $600 million for its investors...see the last paragraph in this story from the Santa Monica Mirror in 2006:

"Panel moderator David Abel put the key question: Can Playa Vista serve as a model for other developments? Can it be replicated? Soboroff said that the project had produced $600 million in losses to three companies and taken 20 years, all because people thought of it as a real estate project instead of a public policy project.
Posted by Rex Frankel at 11:56 AM No comments:

A local public hearing by the state's Coastal Conservancy has been scheduled for this Thursday, January 19th at 1 PM at the Baldwin Hills Overlook park located on Jefferson Blvd for the request for $6.5 million to do engineering studies of yet another alternative plan for the "restoration" of the Ballona Wetlands, which was purchased by the state's taxpayers in 2003. This new plan has not been discussed at any public meeting before and only came across my desk thanks to the Google-Alerts system. It's almost like the backers of bulldozing Ballona don't want us to come to this hearing.

I say "restoration" because it involves massively bulldozing out much of the existing wetlands and upland wildflower/coastal sagebrush areas and replacement of it with whatever the L.A. Harbor department and others not from our area are dreaming about putting here. The L.A. Harbor department wants to massively dredge out the existing healthy and functioning habitats at Ballona to replace healthy habitats they want to destroy in San Pedro as part of harbor expansion plans. Rather than buy land to expand the Ballona preserve, they would simply "improve" Ballona and not save any more lands for wildlife habitat.

We advocate a slow, community-planned restoration of the Ballona Wetlands, not an industrial scale bulldozing operation that wastes million of dollars and only benefits massive engineering firms.

The L.A. Weekly did an excellent story in May 2011 on this subject:


And to read BEEP's views on the restoration proposals, on page 4 of the Fall 2011 newsletter:
http://ballonacreek.org/wp-content/uploads/2015/05/bcrnews31.pdf

PLEASE COME TO THIS HEARING AND DEMAND THAT ANY RESTORATION PLAN REFLECT WHAT THE LOCAL COMMUNITY AND EXISTING USERS OF OUR HIKING TRAILS WANT, NOT WHAT OUTSIDE WETLAND DESTROYERS WANT.

I have attached the staff report and the latest map. If they don't come through, they are at the following web-link:

Here is the agenda for the Coastal Conservancy Hearing:


Also, to see a chronology of the various evolving proposals by the State's managers since 2008, click here:

Finally, for those looking to know more, here are some background reports I recently posted that show the natural and historical value of the Ballona Wetlands as they are.

A SUMMARY OF ALL THESE STUDIES:
http://ballonaplants.blogspot.com/2006/09/complete-list-of-native-plants-of_22.html
Posted by Rex Frankel at 1:42 PM No comments: