In a surprising and welcome turnaround, the managers of the state-owned Ballona Wetlands preserve have withdrawn a $209 million proposal to let heavy equipment loose on the site in order to create their vision of a restored wetland.

The proposal was unveiled as the "preferred alternative" at a community meeting last September to almost unanimous disbelief and disagreement from the groups that have worked up to 30 years to save the wetlands from a developer's bulldozers. What is notable is that groups that have frequently disagreed about Ballona issues in the past, such as the Friends of Ballona Wetlands, Ballona Institute/Wetlands Action Network, and our group, BEEP, were united in our distaste for this plan.

The plan we all agreed went too far would have converted what is currently a bio-diverse area with 3 habitat types and hiking paths into almost exclusively open water with almost all one habitat type, salt marsh. While we at BEEP want to see more water brought into this site as part of a restoration plan, we feel this went too far.

To compare the State's proposal to what is there today, currently 29% of it is a salt marsh, 19% is a freshwater marsh, and 49% is an upland/grassland area that contains most of the hiking trails. The State's plan would have been 82% saltmarsh, 2% freshwater wetland and 16% upland. It's uncertain where the Ballona Creek bikepath would have been re-routed and it's most likely that, given that most of this area would be under water, most of our hiking trails would be gone.

There is no question that the wetlands have been altered by man in the past, such as by road construction and by the development of the Marina Del Rey yacht harbor which resulted in dumping up to 10 feet of wetland mud onto the north part of the wetlands. But despite all the damage done 50 years ago and more, Ballona has bounced back and some of the areas that were most heavily altered are covered with thickets of wetland and upland plants, providing nesting areas and hunting grounds for numerous kinds of wildlife.


The New Proposal unveiled on January 20th by Dr. Shelley Luce, executive director of the Santa Monica Bay Restoration Commission: does not convert the parcel east of Lincoln Blvd. from uplands/grasslands into a deep water marsh like in the previous plan. It also does not require that Lincoln Blvd. be completely rebuilt and elevated. To attempt such a change to this exceedingly busy highway would assuredly be a many-year traffic nightmare.

We have a lot more to say about why the planning process for the Ballona Wetlands went astray, and that will be posted soon. While this latest proposal may still go too far, as I've heard from some, and dig up too much of this site, we are glad that the State has recognized that the local Ballona community wanted something better for our wetland.


BELOW: the September 2008 proposal from the State. (Click on image to enlarge)
I have added elevations above sea level to give an idea how much dirt would have to be removed in the State's proposals. The current elevation of the land north of Ballona Creek is around 15 feet, while the land south of Ballona creek is around 3 feet. 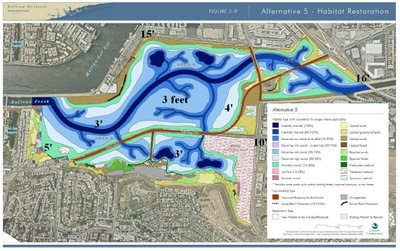 BELOW: the revised State restoration proposal unveiled in January 2009 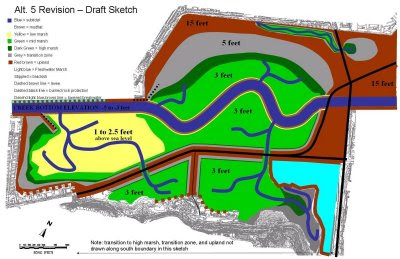 BELOW: a restoration proposal drawn up by the Friends of Ballona Wetlands in September 2007 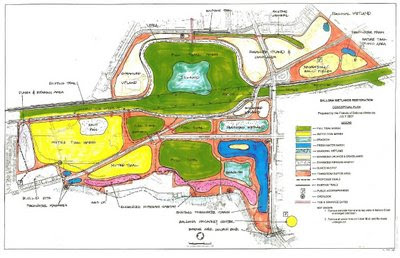 To read the report summarizing the 5 proposals:

To see maps of the proposals:


TABLE COMPARING THE HABITAT-CONVERSION UNDER THE 5 ALTERNATIVES:

NOTE: Percentages here are computed based on the total land owned by the State that can be modified as part of the restoration project which is 579.8 acres. The percentages exclude the 39.8 acre Freshwater Marsh urban runoff basin that was constructed by Playa Vista on State lands and the 10.9 acre Southern California Gas Company facility.

HOW CAN YOU TELL THE DIFFERENT HABITATS APART?
This is a freshwater wetland:
Cattails growing in the lowlands west of the Gas Company facility. 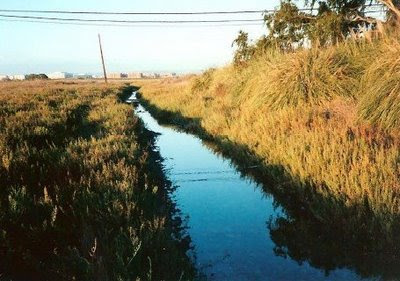 Sedge, a type of grass in the lowlands near the Gas Co. facility

WHAT IS A SALTMARSH? 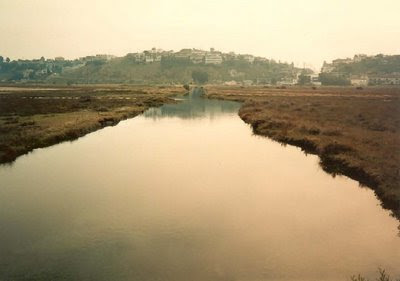 The tidal channel on the far north side of Ballona, alongside Fiji Way 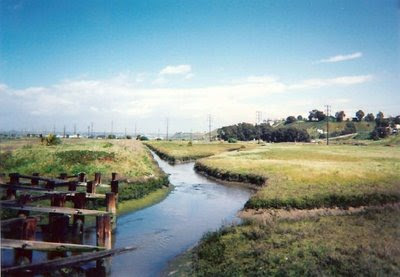 The confluence of tidally influenced salt water channels and the freshwater Centinela creek. The wood piers used to support the Pacific Electric Railway. This is next to the small businesses on Culver Blvd. in Playa del Rey. 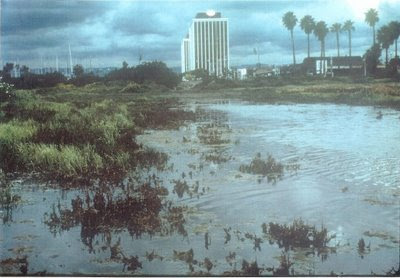 This is the high salt marsh that exists on top of soil dumped from the construction of Marina Del Rey. The saltmarsh plants such as pickleweed and alkali heath and saltbush that survive here get their water from rainfall, not the ocean.

FINALLY, WHAT IS AN UPLAND?
An upland is typically anything above 5 foot elevation 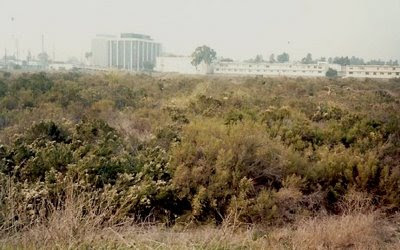 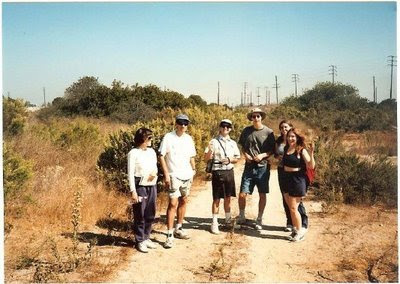 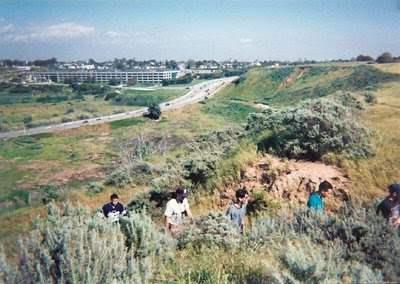 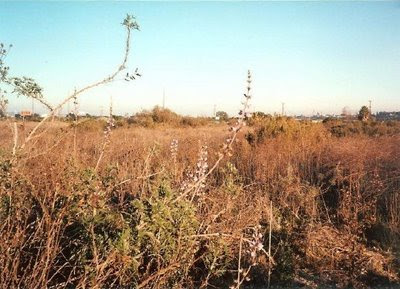