-----
THE TWO COMPETING PLANS FOR CLEANING UP SANTA MONICA BAY:Natural Treatment by River and Wetlands Restoration, or

At Least 20 Hyperion-Style Treatment Plants Throughout the City 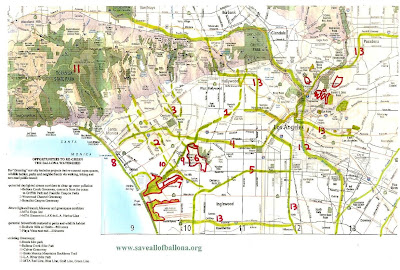 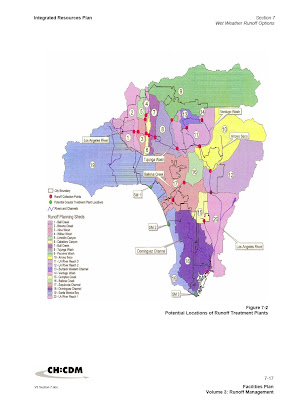 The above map can be found in the City's Integrated Resources Plan, located on the web at http://lacity-irp.org/documents/v3-runoff-management.pdf
(large 8.4 megabyte file)


THE CASE FOR NATURAL TREATMENT METHODS FOR CLEANING UP WATER POLLUTION IN BALLONA CREEK AND SANTA MONICA BAY
By Rex Frankel/March 31, 2007

The Regional Water Quality Control Board has set deadlines for complying with the Clean Water Act for trash, bacteria, and other pollutants in our urban waterways and beaches.

The trash deadlines are very short, a matter of 2-3 years.

The bacteria deadlines are much longer, as compliance is much more complicated, and were set this way:

for the Santa Monica Bay watersheds including Pacific Palisades, Santa Monica, Venice, Westchester, Playa Del Rey and El Segundo, the deadline for full compliance is July 2013 if the Cities choose to merely treat the water and dump it back into the creek or ocean; this is called the standard approach.

the deadline is July 2021 if the cities not only clean up the pollution, but reuse the water, or replenish groundwater aquifers, and/or create wetlands, wildlife habitat and parks as part of the project. This is called the “integrated approach”. If the City chooses this approach, by the interim deadline of July 2013, the City must reduce health code violations at beaches by 25%, and reduce violations by 100% by 2021.

For the Ballona Creek Watershed, including Mar Vista, Del Rey, Culver City, east Santa Monica, Brentwood, Inglewood, Hollywood and West L.A., the final compliance deadline is July 2017 if the standard approach is used, or July 2021 if the integrated approach is used.

Either way, the City needs to get moving as these approaches will take a long time to construct and finance.

For the rest of the City, the water board has not yet adopted cleanup timetables for bacteria in the L.A. River and Compton and Dominguez Creeks.

How Much Water to Capture:
The City’s engineers have determined that in order to comply, they must capture and manage 25% of the City’s total runoff. This is based on the determination by the Water Board that before L.A. was developed, natural sources of bacteria led to high pollution levels on an average of 17 days a year. This is based on a reference watershed, the Arroyo Sequit in west Malibu, which is largely undeveloped and yet bacterial water standards are violated 17 days a year there. Therefore, the City has decided to capture and manage the runoff from all “rain days” except the largest 17 days of flow per year. That’s how the 25% number was arrived at. Since “rain days” include the day of a storm and the next three days (each storm creates 4 days of heavy amounts of runoff), this means that rain days in L.A per year have ranged from 30 in 2003 to 104 in the El Nino of 1998.

As anyone who has seen our creeks flowing on a rainy day knows, this 25% is still an enormous amount of water.

Current City Proposals to Comply with the TMDLS, (called Implementation Plans):
For the Santa Monica Bay watersheds, the Cities of L.A., Santa Monica and El Segundo made this “Integrated” proposal to the Water Board last year:

1. Storage and Reuse sites: use parks, government facilities and schools to capture clean rainfall in cisterns so that it can be reused on-site for landscape irrigation.
Potentially there are 62 acres of vacant urban sites available for this use, too, although 27 acres of this is at LAX Northside. The other acreage is not specified but the only site that comes to mind is at Playa Vista.

2. Divert dry weather runoff to the Hyperion treatment plant or to Santa Monica’s new urban runoff treatment plant. Most of these diversions have been constructed.

If #1 doesn’t work, the Cities proposed these additional “Standard Treatment” projects as a fallback:

3. Three Treatment Plants: at Temescal Canyon Park at Pulga Canyon (the ex-Oxy oil site); South Beach Park in Santa Monica; and LAX Northside (which could be either a treatment plant or a subsurface constructed wetland, which is effectively a gravel filter).

4. Operational Storage Sites: underground storage tanks under all existing beach parking lots would be needed to hold all the water so the treatment plants have more time to treat it; this allows treatment plants to be smaller.

The Cities’ proposed Implementation Plans proposed to only construct the projects in #1 above, which are projects in 25 parks and government sites, by the interim compliance deadline of July 2013, at which 25% of violations must be eliminated. These sites include 5 parks and street parkways in Venice, 2 parks in Westchester and Playa del Rey, 5 parks in Brentwood and the Palisades, 9 park and civic buildings in Santa Monica and 4 detention basins and the golf course in El Segundo. The problem with this plan is that these 25 projects would only capture around 2% of the Cities’ target runoff goal.

Proposals #3 and 5 could also curtail existing public use of these parks, or could be sited under a landslide (Pulga Canyon)

Based on this huge shortfall, the Water Board rejected this Implementation Plan in April 2006 and directed the cities to present a revised plan by January 2007, to allow the Water Board staff time to analyze it in time for the planned hearing in June 2007. So far, I have not seen nor heard of any revised plan being submitted.

For the 130 square mile Ballona Creek Watershed, City engineers have proposed some similar “integrated” facilities like in the Santa Monica Bay watersheds Plan:

However, because this approach doesn’t add up to managing enough runoff, the cities also proposed these “standard treatment” projects:

-including integrated projects #1 and 2, and eliminating a Centinela Creek treatment wetland and other creek restoration and in-stream cleanup projects; and
-building 3 wet weather treat and discharge (not reuse) plants at a cost of over $900 million in
the upper watershed, probably near La Brea and Venice Blvds., at the lower end of Westwood Creek/Sepulveda channel, and at the confluence of Centinela Creek and Ballona Creeks

Problems with the Cities’ Proposals:
In Neither of the 2 watershed Implementation Plans, or in the L.A. City IRP, is there any consideration of river restoration and removal of concrete or of a citywide network of greenways and treatment wetlands, except for mention in passing. No actual study that makes it possible to compare the merits of the natural treatment and restoration approach to either the source reduction or treatment plant approaches was done. This appears to violate the California Environmental Quality Act, which requires that project approval studies must consider a “reasonable range” of alternatives to the proposed project that could reduce the significant environmental impacts of the proposal. Natural river restoration and treatment wetlands have been documented as an effective and less expensive way to solve our water pollution problems, costing half as much as the “standard” methods. (See L.A. County Public Works Department study summary at this link: http://ballona-news.blogspot.com/2007/11/thursday-august-10-2006-river.html


Why Go Natural? Alternate Natural Treatment Case Studies:
Natural treatment of water pollution is not some gleam in the eye of environmentalists. It is, in fact, being done right now in communities only a few miles from the Ballona Creek area. We have several examples of natural runoff capture and treatment methods available for us to evaluate their potential, showing that treatment plants are not the only possible pollution solution.

The Sun Valley Watershed project in the East San Fernando Valley (http://sunvalleywatershed.org/) has been launched in an area that does not have any storm drains and therefore, has severe flooding problems. The retrofit project includes construction of cisterns and infiltration basins, and in many cases using existing gravel pits to hold the stormwater. These pits will also serve as parkland on the upper terraces, while habitat and water storage will be in the lower elevations. The project’s goal is for no rainfall/runoff to run into the L.A. River. This means that any street pollution will be captured and kept from our rivers and beaches.

The South Bay Cities including Manhattan, Hermosa, & Redondo Beaches and Torrance have an equal level of concreting of the landscape as the rest of Los Angeles, in that there is very little open space left. But this region has dramatically less wet weather beach water violations than Ballona and the Santa Monica region. (See study of pollution problems at this link, especially on page 3-15. The study concludes
“In general, dry weather exceedances have been more problematic in Jurisdictional
Groups 5 and 6 (the South Bay Cities) than wet weather exceedances.”
SOURCE:

The reason can be seen in the many open and unpaved water catch basins throughout the South Bay, which are in fact remnants of a system of vernal pool wetlands that once covered large areas of the sand dune system that the South Bay was built upon. Rainfall is now funneled from developed areas into “sumps” featuring wetland vegetation, as these natural basins are called, whereupon any overflow is carried by a storm drain to the ocean. Because the problematic dry season flows are very small compared to storm flows, they can easily be, and, in fact, are being diverted into the L.A. County sewage treatment plant in Carson. Therefore, the cleanup of the remaining water pollution problems in the South Bay is being accomplished much more easily than in the Ballona Watershed, because much of the natural drainage system was never paved over in the first place.

In the Ballona and Santa Monica Bay watershed of the City of Los Angeles, these natural treatment methods have a great potential to provide parks and habitat and they require very little maintenance compared to the “standard treatment” methods. Ultimately the taxpayers need to know the pros and cons of all three methods of compliance; until now, these choices have been made by City Engineers in relative isolation from the general public that will foot the bill.
Posted by Rex Frankel at 7:14 PM