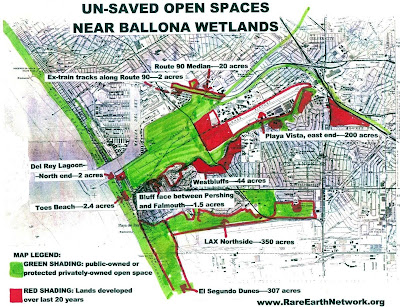 -----
STATUS OF THE OPEN SPACES AROUND THE BALLONA WETLANDS:

(TEXT IS COURTESY OF DR. TRAVIS LONGCORE, AT THE URBAN WILDLANDS GROUP)

BALDWIN HILLS—(not on above map) APPROXIMATELY 300 ACRES OWNED BY THE STATE PARKS DEPARTMENT, AND 930 ACRES OWNED BY OIL COMPANIES
HABITAT VALUE: The Baldwin Hills represent the largest contiguous open space in the western Los Angeles Basin. Significant swaths of intact coastal sage scrub still exist, and the Baldwin Hills may serve as the eventual source for many wildlife species that would use an enhanced wildlife connection as proposed by the Ballona Creek Parkway, such as coyote. Two projects would contribute significantly to biological connectivity: the "land bridge" proposed over La Cienega Boulevard and another bridge between the Baldwin Hills Scenic Overlook and Ballona Creek. The Baldwin Hills are also an essential source site for reintroduction of species to the Ballona Valley, such as desert woodrat or deer mouse.

BALLONA CREEK
HABITAT VALUE: Ballona Creek offers the only opportunity for a contiguous link between the coast and the Baldwin Hills. Greening along the channel could focus on connectivity for coyotes, because the presence of this species around the coastal wetlands will be critically important to restoring native bird diversity. Coyotes reduce the activity and abundance of other smaller predators, such as raccoons, skunks, and fox, which threaten native birds. Alterations to the channel to allow native vegetation, where feasible, would provide badly needed riparian habitat that would enhance connectivity and serve resident and foraging birds.

PLAYA VISTA EAST END—200 ACRES
HABITAT VALUE: The eastern portion of the Playa Vista property is the site of historic wetlands, as shown by early 1900s collections of wetland species (Epilobium pygmaeum , Aster subulatus var. parviflorus ) near Mesmer Ave. This low plain would be ideal for the restoration of freshwater wetlands and vernal pools that could both support endangered species such as Riverside fairy shrimp and serve sto rmw ater treatment and infiltration functions. It is also an appropriate location for freshwater wetlands and riparian restoration.

CONFLUENCE OF CENTINELA AND BALLONA CREEKS
HABITAT VALUE: The confluence of these two channels is a peninsula largely inaccessible by foot because of the Marina Freeway. It would make an excellent site for restoration of riparian vegetation that might continue up Centinela Creek between the channel and the freeway. This site is would be an ideal loafing spot for waterbirds, it could be greatly enhanced through restoration of riparian vegetation.

MARINA FREEWAY MEDIAN—20 ACRES
HABITAT VALUE: The property under the freeway extension under construction is contiguous with and should be hydrologically connected with the Ballona Wetlands. Restoration of the remainder of this parcel after freeway construction would provide stormwater treatment and valuable wildlife habitat for noise-tolerant species.

U.S POSTAL SERVICE—SURPLUS 20 ACRE MAIL PROCESSING FACILITY LOCATED AT JEFFERSON AND ALLA ROAD
HABITAT VALUE: The location of this property along Ballona Channel offers opportunities for a treatment wetland and/or habitat restoration. The site has no current ecological value.
RECREATIONAL VALUE: The property presents an opportunity to lessen the burden on the heavily used parks of Westchester, West Los Angeles and Culver City. The creation of playing fields for soccer and other sports would greatly expand recreational opportunities for area youth. The stretch along the creek could be used as passive open space for strolling, picnicking and bird-watching. The site's proximity to bus routes and the Ballona Creek bike path would make it easily accessible to area residents.

BALLONA WETLANDS STATE PRESERVE—600+ ACRES BOUGHT BY THE STATE IN 2003
HABITAT VALUE: The State Coastal Conservancy is currently developing a restoration plan for these parcels, now in State ownership. This plan should include restoration of the rarest of local wetland types, coastal saltmarsh, with significant and restored uplands necessary for pollinators and other ecotonal species. The State endangered Belding's savannah sparrow, which is found only salt marsh habitat, depends on the success of the restoration.

BALLONA WESTBLUFFS—44 ACRES
HABITAT VALUE: The top of the West Bluff site, now slated for development, represents the last best place to restore coastal prairie and vernal pools in the region. It is of sufficient size to help maintain some of the grassland birds that are under severe pressure from loss of habitat, such as loggerhead shrike, white-tailed kite, and western meadowlark. The restoration of vernal pool habitat would be similarly significant for local biodiversity and could be home to rare and endangered species such as Riverside fairy shrimp and spade-footed toad.

SOUTHERN CALIFORNIA GAS COMPANY STORAGE WELL FIELD—50 ACRES AND ADJACENT PRIVATE LOTS STRETCHING WEST TO PERSHING DRIVE
HABITAT VALUE: The Gas Company properties at the Ballona Wetlands and up the bluff would be an important part of a restored wetland ecosystem. The bluff faces are in need of restoration to replace iceplant, and the bluff top might support some coastal prairie vernal pool habitat if restored. Essential infrastructure should be assessed for how it might be more compatible with surrounding natural habitats, for instance by shielding and reducing intensity of nighttime lighting.

NORTH END OF DEL REY LAGOON PARK—APPROX. 2 ACRES
HABITAT VALUE: Historical maps show Del Rey Lagoon as the historic mouth of the Ballona Creek. Increasing the ecological value of this site will require better connection with Ballona Creek, through Lot C, which is currently threatened with development. This site would have a high value as part of a larger rehabilitation of the Del Rey Lagoon to increase/establish tidal flushing and replace the largely exotic landscaping with native species. This would enhance foraging opportunities for the endangered California Least Tern. Lot C is the ideal location for such an effort, so that restoration occurs at the northern end of the lagoon, leaving existing recreational uses intact at the southern end.

DUNES AT SOUTHWEST END OF DEL REY LAGOON PARK—APPROX. 2 ACRES
HABITAT VALUE: Toes Beach Dune is unique as the last undeveloped coastal dune contiguous with the beach between Ballona Creek and Palos Verdes. It shows typical dune development and vegetation, including beach burr and beach evening primrose. Minimal exotics removal and planting would be needed to transform it into a diverse strand and dune scrub community, with attendant wildlife, including endangered El Segundo blue butterflies.

EL SEGUNDO DUNES—OWNED BY L.A. DEPARTMENT OF AIRPORTS
HABITAT VALUE: At 300 acres, the dunes at LAX represent an internationally significant biodiversity hotspot. Many unique subspecies are found on the dunes, including the El Segundo dunes spineflower, El Segundo blue butterfly, four unique moths, a new species of crab spider, two rare weevil species, and the unique El Segundo dunes Jerusalem cricket. Approximately one hundred acres of the dunes are not included in the existing butterfly reserve and deserve protection. The dunes are also threatened by proliferation of invasive exotic species such as Myoporum that must be better controlled.
Posted by Rex Frankel at 4:02 PM

Labels: What's Left to Fight For: